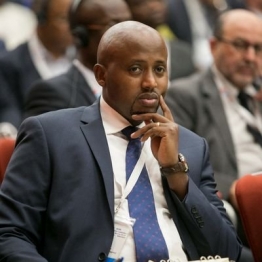 
For the past six years, Mr. Arthur Asiimwe has been the Director General of Rwanda Broadcasting Agency (RBA), the national public broadcaster of Rwanda that carries both television and Radio networks across the country.

As DG, Mr. Asiimwe doubles as the Editor-in-Chief of the national broadcaster and also oversees day-to-day operational/managerial obligations of the institution that runs two TV channels and eight radio stations with slightly over 300 employees.

He has been a journalist for the past 19 years and previously served as Managing Editor of Rwanda’s only English Daily, The New Times, correspondent for news agencies like Reuters (6yrs), the Associated Press (AP), UN-IRIN News network and The East African Newspaper, mainly covering the Great lakes Region.

Prior to joining RBA, Mr. Asiimwe was the Director General of Rwanda Health
Communication Centre (RHCC) of the Ministry of Health.
He pursued a master’s Degree in Journalism (M.A Journalism) from Carleton
University, Canada (2009) and holds a Master’s Degree in Public Health (MPH) from the National University of Rwanda (2015) and a Bachelor of Business Administration (BBA) in Marketing from University of Rwanda. Mr. Asiimwe also holds a diploma in Strategic Business Leadership from Swedish Institute of Management.

He is currently the vice Chairman of African Union of Broadcasters (AUB) Executive Committee, a former Chairman of Media High Council of Rwanda, and also currently chairs the board of Rwanda Printing and Publishing Company Ltd (RPPC) that publishes Imvaho Newspaper. He also serves on the board of The New Times Publication.